Passion, effort, excellence and success. These four values make up the Cinco Jotas Universe: passion for our work, effort to maintain tradition by respecting our Spanish meadows and sustainability, constant search for excellence and, of course, the taste of success. This is the satisfaction of creating a culinary treasure and being present in the best restaurants in the world

At Cinco Jotas we enjoy sharing these values with other disciplines. One of them, undoubtedly, is sport. We will pay tribute to this during the most important tennis tournament in Spain, the Mutua Madrid Open (3-12 May at the Caja Mágica stadium). 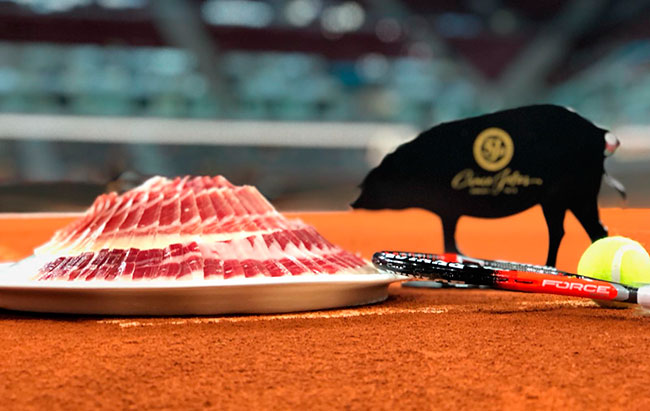 There we will witness the passion of tennis, players’ determined efforts on the courts, the perpetual goal of achieving excellence and being #1 in the word. And, of course, success; that unrivalled sensation of hoisting the trophy and feeling the warmth of thousands of spectators from the Manolo Santana winner’s circle.

The 18th edition of the Mutua Madrid Open will see the 10 best tennis players in the world compete, including the return of Swiss tennis superstar, Roger Federer, as well as David Ferrer, the Spaniard playing his last professional match before retiring from the game.

With them – and all the tennis fans - Cinco Jotas will be enthusiastically cheering on from the side-lines. Our master carver will offer visitors the luxurious experience of savouring our acorn-fed 100% ibérico ham, freshly carved. Cinco Jotas will also be enjoyed in both the VIP tent and in the thematic restaurants of the Mutua Madrid Open.

This is an event where excellence, distinction, and the highest levels of quality will be experienced, both on the courts and in the luxurious VIP areas of the stadium.

Cinco Jotas and the best sport in the world, together during the Mutua Madrid Open. Won’t you come join us?