And the Oscar for the Best Ham in the World goes to ... Cinco Jotas!

On Sunday, February 24, 2019 Cinco Jotas experienced one of the most important milestones of its 140-year history. Hollywood Academy’s 91st edition of the Academy Awards started at the Dolby Theater in Los Angeles, and for three hours and 15 minutes proceededto exude glamor, art and extraordinary talent. But that's not where it ended. The most awaited party began, the Governors Ball, where actresses, actors, directors and other VIP guests had the opportunity to taste - among other exceptional gourmet products –Spain’s gastronomic treasure: Cinco Jotas acorn-fed 100% ibérico ham. 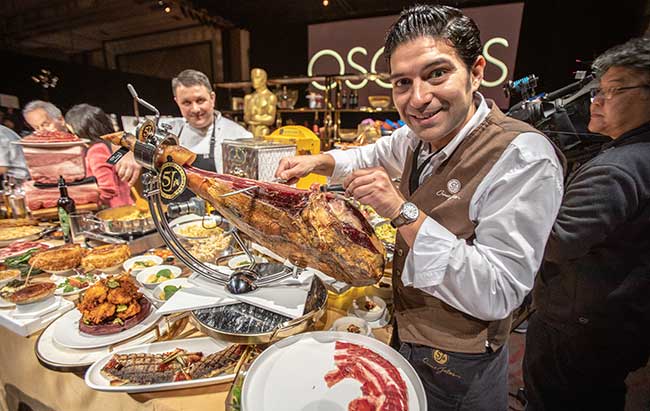 Chef Wolfgang Puck Wolfgang Puck, who has led the outstanding team organizing the menu for the official Oscars party for the past 25 years, personally chose Cinco Jotas to be part of this first class gastronomic selection. Ten Cinco Jotas acorn-fed 100% ibérico hams traveled from the Cinco Jotas curing cellars in Jabugo (Huelva, Andalucía) to Los Angeles to delight the more than 1,500 VIPs invited to the event. 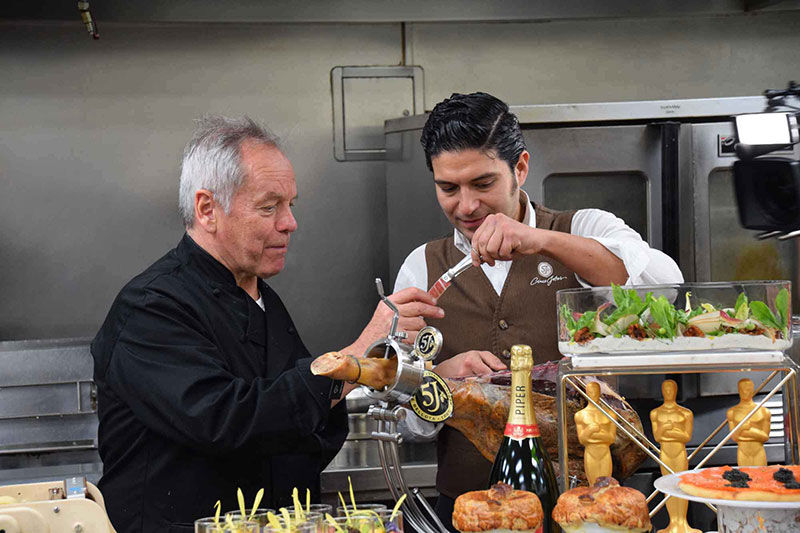 The guests enjoyed the unrivalled flavour of Cinco Jotas in two ways: freshly carved and in a delectable dish. TwoCinco Jotas master carvers, Raúl Garrido and Carlos Sánchez, carved several complete ham legs to offer paper-thin slices in all their magnificent splendor. In addition WP Catering's culinary team, with Chef Wolfgang Puck at the helm, created a recipe as healthy as it was tasty: persimmon salad, Cinco Jotas ham, burrata and wild arugula. Other gourmet delicaciesserved on that cinematic evening were wild salmon with caviar, agnolotti pasta with black truffle and golden Oscar chocolate figurines.

In the days leading up to the event there were various media interviews during which Wolfgang Puck did not hesitate to praise the quality of Cinco Jotas ham; "Cinco Jotas will be the star at the 2019 Oscars," he told reporters. Alice M. Hart, renowned gastronomic stylist and American author, said that "Cinco Jotas is the Rolls-Royce of the ham", to which Wolfgang Puck added: "Absolutely!"


This edition of the Oscars will also be remembered for having a distinctly Spanish flair. In addition to the flavour of Cinco Jotas, Spanish culture and gastronomy were represented by the actor Javier Bardem and Chef José Andrés, a true ambassador of Spanish cuisine in the United States. Before starting the gala, this Asturian chef, who has been nominated for the Nobel Peace Prize for his intense humanitarian work, declared that " Iberian ham will never stop being present at these festivals, perhaps a bit like the artist that nobody notices but who’s presence is always he role of Cinco Jotas in the official party of the Oscars.

This event represents another milestone in the successful career of the brand in the North American market, where it is already present in the best gourmet restaurants such as Fabio Trabocchi in Washington DC, New Yorkers Gabriel Kreuther, Le Bernardin and Bouley, restaurants in Los Angeles by Chef Wolfgang Puck at the Bel Air Hotel and Bazaar Meats by José Andrés, Picasso Restaurant and Joel Robuchon's in Las Vegas or Chef Grant Achatz's Chicago restaurants and Florie's by Mauro Colagreco in Miami, among others.

Cinco Jotas also has an online store dedicated exclusively to the US market: www.cincojotas.us.